No products in the cart.

Pinnacle Hill Lychees exclusively grows the B3 / Kwai Mai Pink variety with approximately 7500 producing trees. Over time this variety consistently produces each year with few exceptions. It is suited for this region,[ Ingham, North Queensland ] with fruit being harvested from 15th November to 15th January.

The Variety B3 / Kwai Mai Pink originated in Ingham or at least the name B3 originated here.

WORDS BY HERB BOSWORTH. Published in RFCA Newsletter No.25 2/85 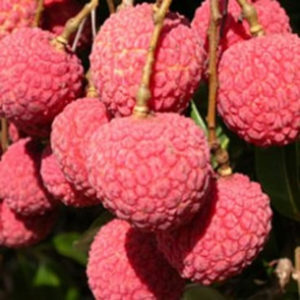 In the early 1950s, I set out to acquire some good lychee trees for my home garden. These were not then available from any commercial nursery in Queensland, so whenever the opportunity offered, I air-layered any old trees that I could find around in north Queensland. I knew of one house garden on the eastern outskirts of Ingham, where several lychee trees grew. About the year 1958 I was given permission to take air-layers, after being assured that all the trees had been imported from China. I soon realised I had three very good varieties, and that one was outstanding, as it fruited without fail every year (this is unusual for a lychee tree).

As I acquired air layers from numerous trees, and planted them in my trial plot, I soon had quite a collection of varieties, and was advised to number them for convenience, as no one was capable of distinguishing named varieties at that time.

The three trees mentioned were given the numbers 3, 5 and 10 (No. 5 was later identified as waichee, and No. 10 as red kwaimai). No.3 is still virtually un-named, and is still known as Bosworth No. 3. It did seem to fit the pattern of kwai mai pink, but further research has left doubts so it is still Bosworth No.3.

The early history of these trees is quite clear. A Chinese resident of Ingham asked his brother-in-law to bring some lychee marcots from China, and this he did in 1932, together with several other Chinese trees. Most of the trees were given to a third relative to plant. Two or three of the lychees subsequently died, and when I became interested, the three remaining trees were in poor shape, from neglect and fire. Very soon after I took the air layers, the house and the property changed hands and the remaining lychees were chopped out.

Every Bosworth No. 3 in Australia, and there must be many tens of thousands in 1984, is a direct vegetative descendant of that one old tree, brought from China in 1932 and long since deceased. I have been able to establish that the lychee trees were obtained from a town in southern China called Skekki, not far from the Portuguese territory of Macau.

Research in China in recent years has failed to establish the Chinese name for the variety, which appears to correspond with kwai mai pink in some respects, but differs quite markedly in others, with different growth and habits.

The Bosworth No. 3 lychees will average 45 to the kilogram, are basically small seeded and very sweet, and will produce good crops every year (despite the season, the climate, or the soil type) from NSW to Cape York.